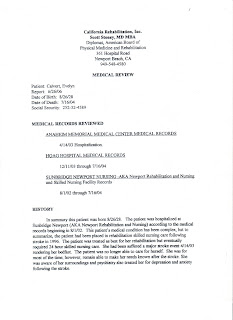 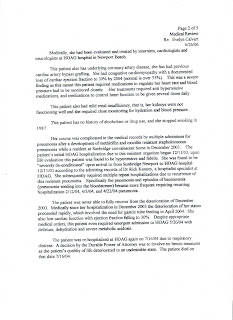 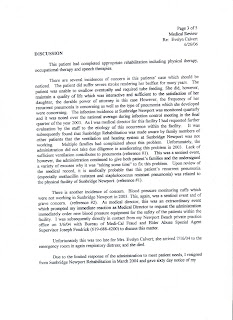 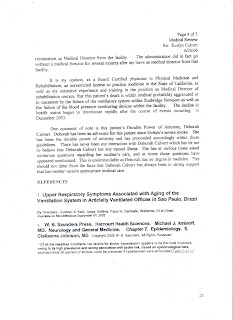 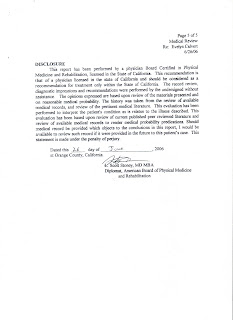 Posted by Deborah Calvert at 5:04 PM No comments:

Dr Stoney said "THOSE BASTARDS KILLED YOUR MOTHER" June, 2006 when I picked up the medical review he wrote declaring Sun and it's CEO, Richard K Matros, responsible for Evelyn Calvert's death.

Dr Stoney testified his pleas for help were ignored and he quit as Medical Director of SunBridge Newport Beach, due to Sun Healthcare's blatant disregard for human life. He'd socialized with the CEO, Richard K Matros, and was told the "Calvert" case was already compromised in November, 2003. Furthermore, that Debbie Calvert, myself, would be better off taking pix of Mr Matros with his "women friends" at "Laker's games" and sharing them with Dr Matros, his wife, rather than suing -to get further with Matros in retaliation for his blatant harm done to my mother. A clue Matros had already engaged my corrupt attorney at the time, Daniel Leipold, to commit legal malpractice, so that Matros couldn't lose his job! Matros' willful misconduct was easy to prove. And apparently his infidelities were as well!

Even the Dept of Justice, via Claude Vanderwold, prevented justice in this case! Was it for a price?

This case is often refered to as the "kiss of death" because so many have died who took part in it. Starting with not only the five victims, 1) Stella Carter; 2) Richard Laga; 3) Betty Harness; 4) Man in Rm2B Oct 2003 and my mother, 5) Evelyn Calvert. Then two attorneys died, both the original wrongful death attorney who represented me fraudulently, Daniel Leipold, upon learning I was suing him for malpractice, in March, 2007, of unknown causes in his sleep. This should be seriously investigated because of the magnitude of Rick Matros' profit from his malpracitce. Then just 2 months later my malpractice attorney, Herb Patt, an associate of Andres & Andres who suffered a large stroke and passed away. Witnesses Toni Chesmire, activities director at SunBridge Newport of Lou Gerhig's disease and Dolores Otting, a caretaker of a neighboring family member to my mother, died of a brain cancer in 2012.  Or was it the filth found by Otting in the ductless basement HVAC system that caused cancer to her and many others that spent time in the Sunbridge facility on Superior Ave in Newport Beach?  That system was sealed shut in 2003 upon discovery it was faulty and condemned by OSHPD in June, 2003.
Posted by Deborah Calvert at 3:12 PM 2 comments: