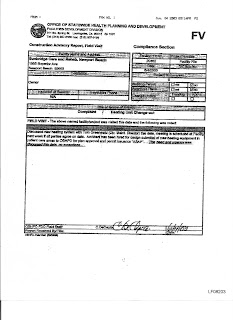 Don Morey, legal rep for OSHPD, says this and other field reports are missing from their records when I requested the copy of their file in 2010. They were purged from the public records. Why?
This looks like fraud to me. Sun's top officers were facing a possible firing over their handling of this facility in Newport Beach so it was in their best interest to bury these records!

This field report states "the need and urgency was discussed this date ~NO exceptions!" The HVAC system had been condemned by OSHPD on May 15, 2003. And never replaced for over 2 years. Sun sold this facility November 30, 2003, after killing 5 patients, so as to divest themselves from this liability.

The California Dept of Health, via Jackie Lincer, shut down this facility in December, 2003, not allowing my mother to return after a month long stay at a local acute care hospital, Hoag. She also refused any new admittances for six months until staff could be properly trained, due to these deaths. I have documents confirming this.

Does the Dept of Health even communicate with OSHPD? When there is a state injunction against Sun Healthcare why wasn't this facility held to a higher standard of care and this equipment immediately required to have been replaced in instead of allowing it to kill my mother, Evelyn Calvert? Sounds like corruption to me.

Sun Healthcare Group Inc admitted fraud in my wrongful death lawsuit mediation, stating they admitted to under staffing most every day she resided in their facility from August 1, 2002 until Decmber 11, 2003. This was in violation of an existing 2001 Calif state injunction yet the Dept of Justice turned a blind eye. I was thretened by my corrupt attorney for the CEO that they were also punishing me for writting too many complaining letters and deducting $20,000 from our settlement. After mediation I refused to sign confidential disclosures after being coerced into signing by a corrupt attorney. The CEO of Sun, Rick Matros, threatened me if I pursued the case to a jury trial I'd be "harmed". And that I wasn't getting the keys to his Bentley. I sued my attorney who passed on those threats for malpractice and he died 2 weeks after learning I'd retained Andres & Andres to sue him. I won that case against his estate in 2008. Daniel Leipold was his name, and I believe he was a stooge for Sun Healthcare. Another attorney I paid to legally help me, Keith Wiesbaum, was also on Sun's side giving me the message not to sue Leipold and Matros was a dangeros man.
Posted by Deborah Calvert at 3:54 AM No comments: